I found a version of a Persian New Year Story in PERSIAN which would be fun to listen to even though I don’t understand a word of Persian! It is HERE 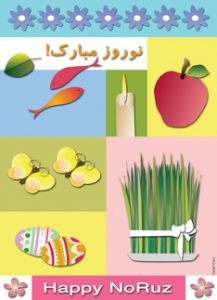 Once upon a time there was an old man named Amoo Noruz, who would come to town every year on the first day of spring. His beard and hair died red, with camphire, his hat made of felt; a light blue shawl around his waist, wearing a pair of wide black cotton pants, and canvas, thin soled shoes. He would walk to the gates of town with a walking stick.

By the edge of town, lived an old lady called Nanneh Sarma (Nanny Frost), who was in love with Amoo Noruz, and waited for him during the last days of winter. Every morning she would get up early, sweep the house, and clean it all over.

Then she would begin with her make up. From dying her hands and feet with camphire, and seven different lines of make up; the eyeliner, and shading of the eyelids; from powdering her cheeks pink, to a glossy red lipstick, and a bit of glitter over her hair. Then she would dress in bright red leg wears and short plaid skirt, and perfume over the hair and a touch of rose water behind her ears. She would then throw a rug in the terrace, overlooking the fountain pool. Her flowerbed, by this time, was filled with irises, and hyacinths of all colors. A couple of trees filled with spring blossoms; their branches swelled with tiny buds of light green leaves.

She had placed in a silver tray “Haft Seen”, Green sprouts, Garlic, Vinegar, Sumac, Apple, Wheat pudding, and senjed. In another tray she had all sorts of dried fruits, candies, and sweets, cookies, cakes, nuts, raisins and chocolates.
Some colored eggs and a couple of goldfish in a fish-bowl, were placed right by the mirror, between the two trays.
She would brew some tea in a samovar, and place an orange in a bowl of water. Then she would sit and wait for Amoo Noruz.
After all this work, it wouldn’t take long for the old lady to get tired and fall into a morning nap. Her eyelids would become heavy and fall down and slowly sleep would take her.
Meanwhile, Amoo Noruz would arrive, but he hates to wake the sweet old lady. He would pick a hyacinth from the garden and place it on her chest, and then he would sit besides her. Making himself a cup of tea, and cutting the orange, eating half, and leaving the other half for Nanne Sarma. Then he would kiss the old lady on a cheek and leave.

As the sun made her way to the terrace of the house, the old lady would wake up, finding her cheek tinkling. Then she would see that everything on the trays had been touched, the orange had been peeled– half of which was there, left for her. The tea had long been brewed, and a cup of tea had been served. In her great dismay, she then would realize that Amoo Noruz had come and gone, but hesitated to wake her up.

She would go desperate, and pull at her pearl necklace and tear it.

The pearls would run all over the place, and that’s why there are usually hailstones on the first days of spring. She would be exasperated at giving up to asleep at the wrong time, but now too late to regret. Her friends and neighbors would tell her to be patient and wait until next spring day, when Amoo Noruz shall walk from the mountains and pass by her house once again.

Nanne Sarma would accept their advice, but nobody knows if she could ever see Amoo Noruz. Some say if the two should ever meet, it will be the end of the world. As of today, we can say that the two have not met, since the world still has not come to an end.