You are here: Home / Our Team / Michelle Marinelli Prindle 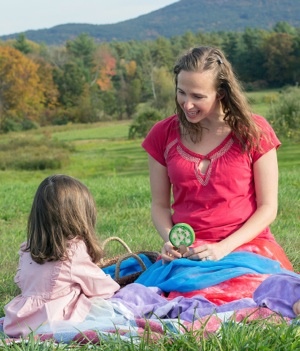 Michelle Marinelli Prindle is a soprano with a Bachelor of Music degree in classical vocal performance from The Hartt School, where she graduated summa cum laude. Her operatic roles include Frasquita in Carmen, Giannetta in L’Elisir d’Amore, the Second Lady in The Magic Flute, and Nannetta in Falstaff. Her sacred music performances include soprano soloist in E.T.A. Hoffmann’s Miserere in B Minor and Mozart’s Regina Coeli and soprano soloist in Haydn’s Missa brevis Sancti Joannis de Deo.  Recital work has included concerts and lecture-recitals in Salzburg, Austria; Heidelberg, Germany; and Florence, Italy.  Michelle has taught private voice and piano lessons for more than ten years. Her students have been admitted to competitive voice and musical theater programs throughout the United States. She is also a diction coach, specializing in German and Italian vocal literature.

Michelle became familiar with the work of Austrian philosopher Rudolf Steiner while studying German language and literature – in particular the Romantic works of Johann Wolfgang von Goethe – in Heidelberg, Germany, in 2006.  Since that time she has devoted her life to learning about Anthroposophy.  She has created a Waldorf-inspired home environment for her two small children, filled with singing and the beautiful tones of Mood of the Fifth music played on the Kinderlyre. Michelle is currently enrolled in a Waldorf Early Childhood Teacher Training at The Alkion Center, where she was introduced to the work of soprano Valborg Werbeck-Svärdström and its remarkable practical applications for healing damaged voices. Michelle uses the Werbeck method with her students to help them discover their own hidden vocal potential.