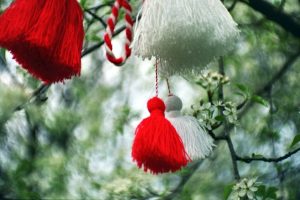 In Bulgaria, the month of March is personified as Baba Marta (Grandmother March), a hunched old woman whose unpredictable temper is reflected in the changeable March weather. She is always arguing with her brother, Little Sechko (February), who likes wine (you can change this to juice or any other food item for your children but I didn’t want to change the authentic story when I presented it to you).

One year, Spring came earlier than usual in February, and an old woman decided that she would take her goats up to pasture before the proper time on 1st March. “Why should Baba Marta mind?” she said to herself. “After all, isn’t she a woman, like I am? Grandmother to grandmother, what will she do?”

Baba Marta overheard her, and watched in a fury as the old woman set off up the mountainside with her herd of goats. At once Marta stormed off to her brother, Little Sechko. “Brother,” she cried. “Now it’s time for you to repay me for stealing my wine. Lend me three of your days so that I can kill that old woman who mocks me by taking her goats early to pasture.” So Little Sechko, remembering how Marta had once threatened to pull on his beard, gave his sister what she wanted.

Then Marta started to blow and to storm, to rant and rampage across the mountain breathing icy winds and blizzards of snow. For three days and three nights she raged. And the old woman on the bare mountainside shivered and shook until her heart grew numb, her blood froze and she turned to stone. For three days and three nights Baba Marta raged, but at last her anger subsided, the weather calmed and the sun smiled.

The people of the village wondered what had happened to the old woman during the terrible snow storm so as soon as the fine weather came they went up to the mountain pastures to look for her. There they found her, turned to stone, but from her bottom a spring of water was flowing. Although the villagers were very thirsty after their long climb, they could not bring themselves to bend down and drink from the spring because it made them laugh so much!

So Baba Marta wreaked her revenge and had the last laugh on the old woman. And that is why from that day to this, Baba Marta has 31 days, and Little Sechko only has 28.

On 1st March people wish each other “Chestita Baba Marta” (Happy Grandmother March) and give each other red and white woollen tassels for health and good luck. For more wonderful March stories and verses purchase the Earthschooling March Enrichment Plans HERE.