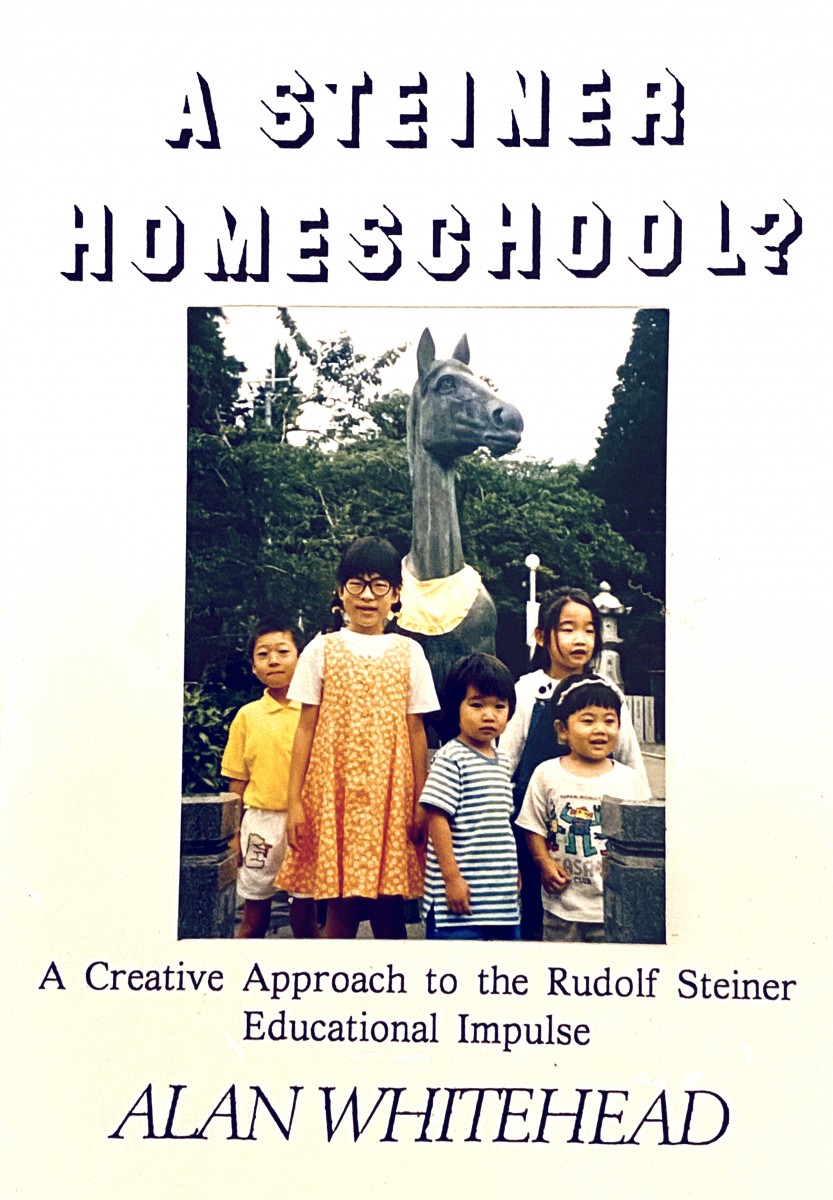 Return to the Main Page of the Golden Beetle Books: Book Club Here

Copyright Alan Whitehead & Earthschooling: No Part of this book, post, URL, or book excerpt may be shared with anyone who has not paid for these materials. Additional note by Kristie Burns of Earthschooling.

Alan speaks in a very symbolic manner in some parts of the book. Although they can be read anthroposophically, passages speaking of Atlantis, archangels, gods, etc. do not need to be taken literarily to be meaningful. I have kept the writing as close to one-hundred percent original so you will also find that he speaks of Australia often and some spelling or manners of speaking may be cultural. Any words I have changed are presented like this: <word>.

Also keep in mind that these books are written by a Waldorf teacher with decades of experience who also studied with Steiner himself so he speaks to an audience that is dedicating their lives to the Waldorf method without exception. Not all of his views will be reflected in the Earthschooling curriculum and not all of them may be ones you want to embrace or are able to use. However, as I read through these passages, I am finding I can distill wisdom from even those paragraphs that do not apply to me.

We invite you to read with an open mind and heart and with eagerness to learn and discuss.

Your author’s spiritual-cultural heritage is <grounded in Rudolf Steiner>. My principle teacher was Douglas Waugh, a Steiner philosopher researcher without peer. Though not a teacher, Douglas applied his forensic intelligence specially to the field of education. His teacher was Walter Burley Griffin, the great American architect who designed our national capital. Burley Griffin’s teacher (and associate) was Frank Lloyd Wright – and Rudolf Steiner!

Steiner Education-Homeschooling was born in Australia in the year of Steiner’s death, 1925. This was when Burley Griffin established a small Steiner community in Middle Cove, Sydney. Here he was busy, with associate Eric Nicholls, in an innovative housing development ‘among the gum trees’ of Castelecrag. Many of these homes exist today, still dwelling in perfect harmony with their sandstone, bird-song environment.

As there was no Steiner school in Australia, the community created a part-time Steiner homeschool program. For example, a young and eager Douglas Waugh taught Greek gymnastics to the small group of children. This defacto Steiner education continued until the mid 1950s when the now larger community sponsored another of my esteemed teachers, Miss Sylvia Brose, to train in the Edinburgh Steiner school. This was in view of her being the founding teacher of the first Steiner school in Australia, Glenaeon-Dalcross. Her teacher was the inspired Winifred West of Fresham; her holy mantra; “In love, serve one another.”

In 1957 Miss Brose carried this compassionate canon into her work with the three founding kindergarten children in a house on Pymble on Sydney’s North Shore. Due to official and public obduracy, this tiny enterprise (Dalcross) remained in a homeschool context for at least three years, when the school began to grow. By the early 1960s, the final home (Glenaeon) was obtained on a beautiful bushland site at Middle Cove; much energy and cash being supplied by the school’s chairman, Eric Nicholls. Burley Griffin died in India in 1934.

My wife Susan and I began training in 1965 in Dalcross, making us the first Steiner teachers trained in Australia. I was privileged to be on the founding faculty of the first Steiner high school in Australia when Gleneaon advanced from primary to secondary in 1967. The school’s subsequent success was in large part due to the embracing of the arts in children’s learning.

In the philistine mid-20th century in Oz, this was an educational revolution indeed! Gleneaon’s most popular community event was its annual Artists Holiday; in which, as the school’s specialist art teacher, I was energetically involved. Even though I was happy in this progressive and liberal milieu, there were dark clouds. These were in the form of a betrayal of Steiner principles, especially in high school. For example, Gleneaon had a strict school-uniform policy, in glaring contradiction to the individualism central to Steiner philosophy. The school also opted for a normal elective-subject, external exam (HSC) program.

This again flies in the face of Steiner’s high school reforms in his own school in Stuttgart 40 years earlier. Here he waged an apocalyptic battle against the forces of anachronism in establishing a non-exam, universal curriculum; one in which all girls and boys learn by subjects. This was the greatest innovation in secondary education in the 20th century, one of which most schools were still unaware of, even in the 21stcentury!

These issues of principle compelled Susan and myself, with a small group of likewise disaffected teachers, to start the second Steiner school in Australia, Lorein Novalis. This also began humbly in 1971, with only eight children – mostly our own! Steiner homeschool credentials were enhanced yet again by our beginning in a house, just a <short distance> from the original Dalcross at Prymble! The first two Steiner schools in Australia started within 50 yards of each other! From here it was a series of forced moves; such as in a friend’s living room, the zoo, and even Hornsby Gun Club. Here we had to clear away the overflowing ash trays and empty beer cans before we could teach! Finally, a benefactor, Garry Richardson, recognized our need and bought a large house at Normanhurst, further north-west, for our use. Garry was Gleneaon’;s chairman at the time.

Within a year, we had outgrown our Normanhurst home; so our generous philanthropist bought five acres with a large house at Dural, even further north-west of Sydney. Within five years, we had prospered so much we could repay the loan in full.

Both Gleneaon and Lorien Novalis are today large schools, teaching children from kindergarten to Class 12. It was 14 years from the first to the second school; after that the floodgates opened, and today there are about 40 Steiner schools in Australia. Steiner homeschooling is healthier still, with hundreds – perhaps thousands – of families choosing this option, or partly, at least. My view is that if Steiner schools are the best, Steiner homeschooling is the best of the best – potentially at least. Again this is based on the principle of individualism, so much easier to address at home than in an institution. The many schools are in various stages of development, and even varying quality, but all subscribe to one or other of the initial streams. ‘Gleneaon’ schools tend to be conservative and reactionary, often compromising principle for pragmatism. The ‘Lorien’ schools are rather creative and radical, adhering as closely as possible to the spirit, if not the letter, of Steiner’s original storytelling, rather than the timeless regurgitation of <sometimes> racist, paternalistic, nationalistic, and sexist ‘fairy’ tales – notably German, especially Grimm. In spite of widely held beliefs, Steiner never recommended these, rather the living, creative approach; the newly created tales inspired by the children’s own Spirit of Time, and Soul of Place.

I was chairman of the Lorien Novalis from its 1971 inception until I left in 1985 – in the last five years pioneering the first universal curriculum, non-exam Steiner high school in Australia. One from which our son and daughter were class 12 graduates – both doing very well in life – sans their HSC!

Susan and I ‘retired’ in 1985, feeling both that, on the basis of being the initiators of the first Steiner full-time teacher-education college at Lorien Novalis in 1979, it was time to disseminate this wonderful impulse of creativity to a wider constituency, especially Steiner homeschoolers.

So in 1990 we published the first of 56 books under the Golden Beetle Books masthead. This is the largest opus of Steiner Education ever published with comprehensive curriculum details from kindergarten to Class 12. At first these were intended mainly for Australian readership, but with global exposure through the Internet, this life-giving educational river is now flowing world-wide. This is especially the case with Pacific Rim countries like Singapore, Japan, America, Canada and New Zealand. Especially America.

This seems a fulfillment of the prophesy, as it was American Walter Burley Griffin, who planted the first precious seeds of an education of soul-and-spirit, of the arts – and even of a  rare practicality – into the uncomprehending cultural soil of Terra Australis del Spirito Santo, as the early Portuguese mariners presciently called this continent – Southern Land of the Sanctified Spirit. Indeed.

INSPIRED BY THIS ARTICLE?

You can discuss this chapter, chat about it with others, or comment on it by using the comment section in this blog or by linking to the unit on the Facebook group HERE.