You are here: Home / Naturopathic Healing / Book Review: In the Dark 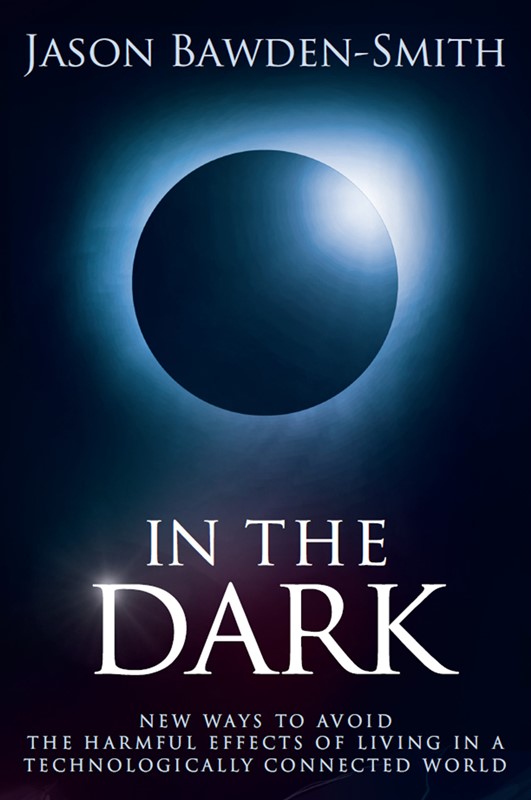 EMFs, Artificial Light, and Jason Bawden-Smith’s “In The Dark”

By Catherine de Long  at https://iamfortytwo.video.blog/

Electromagnetic pollution is an issue near and dear to my heart.  Literally.  My own approximately five month experience with a “smart” meter was a nightmare.   I had terrible heart palpitations when I was standing next to it while washing dishes.  Being someone who finds washing dishes to be a rather meditative activity, I was quite sure that wasn’t what was causing it.  I also had frequent migraines and insomnia.  Hydro-Québec kept telling me it wasn’t any different than / just as “safe” as wifi, microwave, cordless phone or cell phone.  The representatives didn’t know what to say when I told them I don’t use any of those things in my home, and haven’t for about a decade.  Thankfully, the whole situation was finally cleared up when I carefully explained to Hydro Québec’s lawyer that I was only in my early 40s, and my EKG was normal when I was not standing next to their transmitting meter.  The lawyer’s story went from how many weeks it was going to take to get it replaced to having in done in a few days.  During my brief (compared to many) interlude with a transmitting meter, my health plummeted.

The first night after our return to a non-transmitting meter, my son and daughter and I all slept through the night.    Headaches are rare, and the heart palpitations haven’t returned. I thought I must just be getting old, because my feet had starting aching terribly in the last few months of living with a transmitting meter.  This aching completely disappeared the day after the “smart” meter was removed. In retrospect, I realised the electrical wiring is primarily running under the floorboards due to the style of this house. Apparently, the transmission signals running through the wiring non-stop weren’t doing my feet any favours. I never associated it being anything to do with the meter, though, until they stopped instantly when the meter was gone.  I had other common symptoms I didn’t attribute to the meter at the time, as well (see Figure 6.3).  These adventures were years ago, and I still have maintained an interest in the subject, as well as the subject of light pollution, and the biological imperative for darkness.  I think of neighbours here, who have massive quantities of lights left on all night, and their lilac tree only blooms on the side that is protected from the light by the rest of the tree.  It’s also the third tree they have planted there since I moved here five and a half years ago.  The trees keep dying (I presume) due to the nightly exposure to artificial light, and lack of darkness (rest). 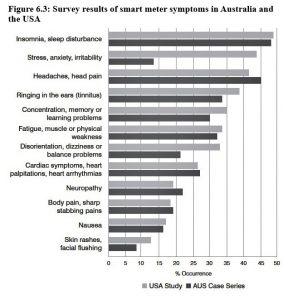 All of this brought me to discover the book titled “In The Dark” by Jason Bawden-Smith.  He is a renowned environmental scientist in Australia where he made huge impacts by leaking New South Wales’ pollution statistics to the media to successfully compel change in the city of Sydney’s sewer system, as well as bringing to media and public attention the severity and extent of the lead contamination issue caused by lead-based paint.

This book starts by explaining Bawden-Smith’s views on technology, and how beneficial technology can be, yet how important it is to take a holistic and integrated view of technology to include its impact on human health.  It was in 2015 he became interested in the connections between physics and biology / the environment and human health.  This led him to study the impact of light and electromagnetic frequencies (EMFs) on human biology.  He wrote this book after implementing strategies in his own life, and successfully improving his blood pressure, blood sugars, and cholesterol levels by changing his exposure to light and EMFs.  He encourages readers to go beyond what they are told is safe, and experiment for themselves.

One interesting point is how sunlight, specifically full spectrum morning sunlight, affects our energy at cellular levels.  This is a deep topic, which Bawden-Smith offers the best, simplest explanations I have seen for the impact of sunlight on mitochondrial DNA.  He points out we need sunlight in the same way trees and plants do.  It is one of the things I appreciate most about his writing style.  He has the ability to take complex scientific topics like heteroplasmy, and present them in simple, understandable terms that don’t make my eyes glaze over.  His work is very well cited with highly credible sources, which are laid out at the end of each part of the book before his summary.

There is a great deal of information included on the harmful effects of artificial light, and light pollution, as well as addressing the fallacies of modern thought with regard to sunlight and skin cancer.  In my opinion, artificial light, chemical-laden sunscreen, and repressed emotions are far more likely to be related to skin cancer than sunlight.  I think of all the people diagnosed with seasonal affected disorder (SAD), who are told to get more sunlight.  Are they ever told to decrease their exposure to artificial light ?

Bawden-Smith believes addiction to technology is our biggest challenge, and is causing an epidemic of health issues.  He specifically addresses a wide variety of wireless technologies, and lays out well the differences in frequencies, as well as pointing out that some EMFs are actually healing, like earthing (the practice of walking or resting barefoot on the ground or in fresh or saline bodies of water to connect with the earth, which helps the body with inflammation and eliminating negative free radicals). 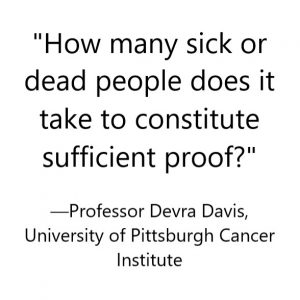 The information covered on just how long various governments have known about the harms caused by EMFs and microwave radiation was surprising to me, as well as how different countries are handling treatment of people suffering from sensitivity to them.

Another concern is faulty wiring in the home, also known as dirty electricity.  Bawden-Smith offers a simple method for checking this, which is to take a battery-powdered AM radio, turn it on without tuning to a station, and hold it close to the outlets in your home.  Any dirty electricity is easily identifiable by an increase in static. 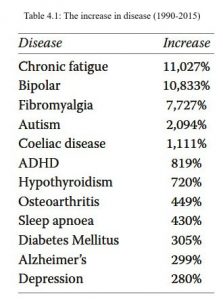 I found a particular phrase in this book extremely poignant.  Bawden-Smith says, “Studies also show that all frequencies of EMFs can react with and damage DNA, leading to cell death or remaining as a mutation…”  All frequencies of EMFs.  He refers to Richard Lear’s work in data mining US government databases to demonstrate 40 different diseases / disorders that have skyrocketed since the 1990s (see Table 4.1).  Examples of these are chronic fatigue and bipolar disorder, as well as things like erectile dysfunction and decreasing fertility rates.  One of the difficulties in this arena is slanted science (see Figure 7.1).  Honest scientists struggle with industry and government demanding their data be changed to present the desired outcome, and funding is eliminated for those who don’t toe the line. 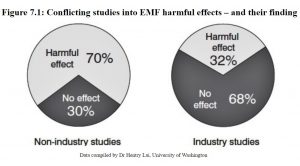 Bawden-Smith is more optimistic than I am regarding signs of change.  I expect large companies to continue to care far more about limiting their liabilities and protecting their bottom line than protecting the health, safety, and lives of men, women, girls and boys.  He points out there is potential for entrepreneurs to develop safer products for people who demand them.  I would dearly love to see that happen.

He goes on to detail a hierarchy of controls, and how to apply them, solutions for a typical modern family lifestyle, introducing some breakthrough technologies that continue to evolve, and what he does.  Particularly Chapter 11 tends to take on the strong tone of a sales pitch, and I am not entirely sure how I feel about that.   For me, it detracts from the overall message.  In my opinion, it is the only drawback to an otherwise excellent book.

Bawden-Smith wraps up the book by addressing how quickly technology has advanced, and it continues to advance at exponential rates, which causes the levels of the EMFs we are living in to do the same.  I absolutely agree with him that wireless devices for anything to do with babies are the most harmful.  I find the numbers and types of these devices on the market to be shocking.  The final section of his book goes beyond the effects on humans to point out some of the effects we are starting to see in nature.  An experiment in Sweden showed that worker bees would stop coming back to a colony (thus causing its collapse) when it was exposed to only 10 minutes of cell phone radiation per day.  This experiment was repeated 83 times with similar results.  He also addresses how the mainstream media attacks people, who speak out, personally, yet refuses to debate the actual issues of harm being caused.  There is an appendix on light and the eye, and a section on his advocacy group www.emfwarriors.com .

I think everyone suffers from the effects of EMFs, whether they realise it or not.  I have been wondering since the last 1990s if road rage is tied to cell phone signals. It has always seemed to me that I started hearing the constant reports of serious road rage incidents when it became much more common for people to have them.  It is like a frog being boiled, and not realising the temperature is rising until it is too late.  Cell phones being added to AM and FM radio waves were then compounded by wifi, and for many people the constant pulsing of a cellular signal through every electrical wire in their house seems to have put them over the edge. I have seen every single one of my neighbours have their health decline since the transmitting meters were rolled out.  In this area, there is only one transmitting meter per household.  Some places, like Toronto, have THREE per house or apartment: one for water, one for electricity, and the third is for natural gas.  Then, there are transponders being installed all over that are receiving the data from all of these meters, and passing it along.

The good news is that there are people doing something about these issues, so there is hope.  Dr. Jack Kruse is a resource on information regarding direct exposure to our eyes with sunlight, and he does have a free forum available on his website at www.jackkruse.com .  In spite of Dr. Kruse’s rather bombastic style, I think he means well.  I recommend checking out the documentary Take Back Your Power, which can be viewed for free at its website –  https://takebackyourpower.net/.  Sometimes people think there is nothing they can do about it, but others are having success preventing initial installation of “smart” meters as well as getting them removed even in areas where they are told it is mandatory.  Not only that, the utilities are having to remove their neighbours smart meters, as well, do to it being a trespassing technology.  We are creators of our world.  We have a duty to be vigilant to ensure the best for our health, and a responsibility to aid our fellow man in sharing good information that can improve the lives of those we co-habit with on this planet.