Upon discovering this statement an intense search commenced to learn more on how music education impacts the whole developing brain. The findings were astounding. These are a short list of findings to share. 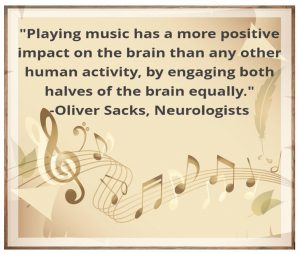 In 2007 his book Musicophilia: Tales of Music and the Brain was released wherein his fascinating deep dive studies of music’s effect on individuals with a broad range of conditions were described in narrative neurological detail.

The healing power of music is ultimately the focal point of Sack’s plethora of studies from a neurologist’s point of view. Sack’s explains that “there is no single musical center in the brain, but rather 20 to 30 networks spread throughout every region that analyze different components of music, from pitch to melody.” From athletes to Parkinson patients, Sack’s outlines the mysteries of how and why music can reach beyond what seems possible to solve seemingly unsolvable problems.

Although fascinating, the benefits for the vast neural network and the developing brain was the focus for research. Sacks also mentioned that “In terms of brain development, musical performance is every bit as important educationally as reading or writing.”

Elena Mannes, Documentarian, echoes this sentiment in The Power of Music where she says scientists have found that “music stimulates more parts of the brain than any other human function.”

This confirms that music’s stimulation and overall impact on the brain is profoundly beneficial and unique.

The magic is in the details of how music effects neural networks of both the academic and creative areas of the brain, developing several skills at once all the while creating a wholistic experience.

Some of the academic benefits include the logical, rational studies: “Music is structural, mathematical and architectural. It’s based on relationships between one note and the next. You may not be aware of it, but your brain has to do a lot of computing to make sense of it” notes one otolaryngologist at John Hopkins Medicine. 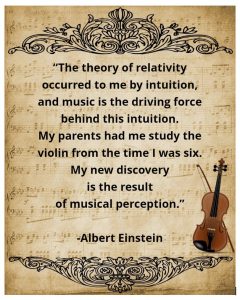 Yet it’s not just this linear, thinking side. The integration is marvelous and the impact on the brain is lifelong due to the nature of plasticity: “Music making places unique demands on the nervous system and leads to a strong coupling of perception and action mediated by sensory, motor, and multimodal integrative regions distributed throughout the brain (Schlaug and others 2010). Playing an instrument, for example, requires a host of skills, including reading a complex symbolic system (musical notation) and translating it into sequential, bimanual motor activity dependent on multi-sensory feedback; developing fine motor skills coupled with metric precision; memorizing long musical passages; and improvising within given musical parameters. Indeed, research over the past 2 decades has demonstrated that intense musical training can result in plastic changes in the developing brain as well as the adult brain (Gaser and Schlaug 2003; Hyde and others 2009).” (Shlag and Wan).

The ‘host of skills’ developed as described above is again, profound and practice worthy.

On the creative and emotional side of things, musical training has been shown to develop empathy, assist in processing complex emotions, increases self-confidence and emotional resilience and improve language abilities. Music and language are very intricately connected and benefit each other tremendously.

While the brain structure and function simultaneously benefit through music training, there are also positive side effects to overall physical and mental health such as decreased blood pressure, increased energy levels, stimulated immune system, increased blood flow similar to that of an aerobic workout, elevated mood and reduces anxiety.

Highlighting the integration once more, perhaps the climax in music training is not just about being better in math or having more empathy but that it shapes our ability to make better bigger picture choices and decisions in life through the informing and unifying of the brain. The Royal Conservatory of Music’s Neuroscience Research Department states that “Important regions of the brain, such as the frontal lobes that perform higher-level cognitive functions, are larger in musically trained individuals than in those without this training” and that “research is showing that learning to play an instrument leads to changes in a child’s brain that make it more likely they will reach their full cognitive and academic potential.”

Musical training thus, is an incredible gift, to share with others and create whole humans fully capable of leading balanced lives.

It might very well be nurturing the genius within.

“Musicopholia: Tales of Music and the Brain” by Oliver Sacks

“The Power of the Brain: Pioneering Discoveries in the New Science of Song” by Elena Mannes

Music Making as a Tool for Promoting Brain Plasticity across the Life Span:https://www.ncbi.nlm.nih.gov/pmc/articles/PMC2996135/