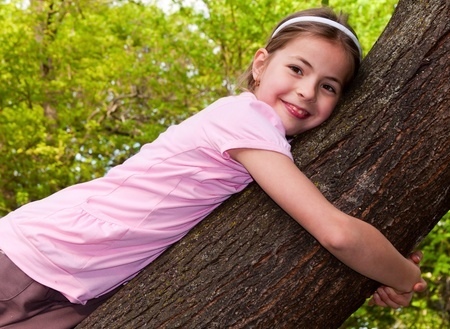 Like this article? See another article by Rahima HERE. Find curriculum for your nine-year-old HERE.

I wrote this article to describes the developmental changes of the nine-year-old child and how parents and Waldorf education meet this psychological stage. It first appeared in Motheringmagazine. For further information we also offer a CD of a workshop by Daena Ross on “The Nine-Year Change: Leaving the Garden.” Click here to see more information.

Parents of nine year olds often wonder, “What is happening to my child?” Children at this age can become very critical and argumentative, or very moody and withdrawn. Nightmares, irrational fears, headaches and stomachaches often arise. Some children feel as if no one at school likes them, or others become suddenly self-conscious about being rich, poor, or otherwise “different.” Parents may be accused of being unfair or of not understanding, as the child rushes off and slams his or her door.

Searching for an explanation for the changes in behavior, parents sometimes blame a new teacher, a recent move, changes in the family such as separation or the birth of a sibling, or simply “growing pains”. An understanding of what is actually taking place can help us avoid needless worry and provide the support and guidance that children need during this time.

What is Happening?  The special needs of the nine year old are the result of an important change in consciousness that marks the end of early childhood and the transition to a new developmental phase. Rudolf Steiner, the founder of Waldorf education, states, “In the ninth year the child really experiences a complete transformation of its being, which indicates an important transformation of its soul-life and its bodily-physical experiences.”

Earlier, before the age of five or so, the child has a dreamlike state of consciousness in which the outer world and inner experience end to flow together. Outer events are not “observed,” but are deeply taken in through unconscious imitation. Whereas babies learn nearly everything through imitation, kindergarten-age children continue to imitate many aspects of their world, such as the movements of the teacher or parent.

While the power of imitation is so strong, the child feels united with the world and experiences no sense of aloneness. But with the loss of this power around the age of nine, the child feels separated from the world. Something that was hidden and slumbering begins to awaken. Nine year olds suddenly have a strong experience of themselves as separate beings, with a new feeling of distance from the world and other people. This sense of self, first experienced around age two-and-a-half, recurs now in a much deeper way, as the inner emotional life of the child begins to develop.

Although children react differently to leaving the sweet, dreamlike world of early childhood, one response is nearly universal: children become more conscious of their surroundings. You will probably find that what was once passed by unnoticed is suddenly focused on and questioned. This awakening to the world may be met with quiet astonishment or sharp criticism, depending on the child’s temperament.

A critical child may notice whether the statements people make are grounded in the real world or are a veneer. He or she may begin to question parents and teachers, wondering, “How do they know everything?” and, indeed, “Do they really know everything?” Something in the child is seeking reassurance that the authority of the adult will stand the test of quality, and that it carries an inner certainty.

In contrast, another child may become more withdrawn and start to look under the bed at night, or may have frequent stomachaches in response to this new sense of being alone. Parents whose children suddenly want to be alone often feel as if they are “losing” their children, as if the children no longer want to share their developing inner worlds. This is a time when intimations of mortality and death can enter a child’s consciousness. Religious questions and concerns about good and evil may also emerge with the child’s increased self-awareness and sense of choice and responsibility.

Usually, within six months after the ninth birthday (and sometimes earlier), the children are profoundly aware of this new sense of separateness between the self and the outer world. As the “I” penetrates into awareness, children begin to experience themselves as self-contained beings. The often feel as though they are in a threshold situation, poised, as it were, on the cusp of their own destiny. A 70-year-old woman wrote of this time in her life: “In this year I had a significant I-experience. I had just come from school in the city and had to change trams. In this moment of waiting, the complete certainty came to me that now all of life lay before me and that I was the one that must travel it.

Essentially, the nine year old is experiencing his or her own identity-to become a separate individuality, able to confront the outer world. Ideally, the child comes through this difficult time with a sense of connection with his or her higher self, a kind of “knowing” that will remain even after the heightened awareness is integrated.

My son spent many difficult months in the throes of “the nine-year change.” One night, as he popped out of bed for the third time, I had to muster great self-control to say, “What now?” “I’m glad I’m me!” he announced, radiating like the sun. He went on to explain, “It’s just like the song “The Age of Not Believing.” The words of the Disney song ran through my mind: “You must face the age of not believing, doubting everything you ever knew. Until at last you start believing, there’s something wonderful in you.” We all shared in his joy and thanked God that family life could once again return to normal.

Parenting Tips  What can parents do to help their child through this important turning point at age nine?  - Understanding what is happening will help both your child and yourself as a parent. When both parents, or parents together with the teacher, consider a child and his real needs, it can help give the child balance. Be patient– this, too, shall pass. Ten is a wonderfully harmonious time between the crisis at age nine and adolescence, when the next intensifying of self-consciousness occurs.  - Be willing to let your child have her own inner emotional life. You can’t “fix it.” Honor her need for privacy or her sudden impatience with a younger sister. Be willing to let go and tolerate distance. Your relationship is changing and will improve again once alterations have been completed. Be nearby with understanding and reassurance that she is still loved.  - Share your thoughts with your child about things that go beyond the every-day affairs of life. But don’t limit your child by providing “answers” or definitions that can’t grow within the child when asked about things like God or death.  - Have faith in self-healing, in your child’s ability to come through this phase. Support individual artistic activity that attracts your child (writing poetry, keeping a diary, drawing or painting, music).  - Support your child’s interest in the world by providing opportunities to build things, visit a farm, plant a garden, do work in the real world. Encourage a connection with the plant and animal kingdoms and with simple human creative activities now before the child explores the world of technology, which is more appropriate for adolescence.  - Nourish your child with stories that illustrate the interconnectedness of life and the powers of fate and destiny. The story of Joseph and his coat of many colors has this element of the dream heralding his destiny and the patience he needed to see it manifest. In the curriculum of the Waldorf schools, the Old Testament stories are .told in third grade because they mirror 2- the inner state of the nine-year-old child. The creation story, for example, describes the child’s own experience of leaving the paradisiacal realm of early childhood, acquiring new self-awareness, and with it the added dimensions of choice and increasing responsibility for one’s actions. In fourth grade the heroic tales of the Norse myths represent the exploits of the new ego in larger- than-life fashion. The Waldorf curriculum also introduces the child to the world through projects in house-building, farming, and the study of the plant and animal kingdoms, not as abstract sciences, but in relation to the human being.  - Recognize that the child needs to establish a new respect for adult authority that goes beyond the blind acceptance of the younger child. Parents can encourage this by honoring a child’s new relationship with a teacher or other adults in his life. Steiner states, “What matters is that at this moment in life, the child can find someone–whether this be one person or possibly several persons is of less importance–whose picture it can carry through life.”(3) Parents can also help themselves be this kind of authority by presenting a united front to the child and by both sitting down with the child when questions of discipline arise (single parents may want to bring in a teacher or other adult during this time).

The magnitude of the changes that a child of this age is going through can be better understood if you contemplate the differences between the child of seven and the child of twelve. The seven year old is light-hearted and always in movement. The limbs are active for learning (through touching, doing, walking the times tables, and so forth). In contrast, the head is relatively large and still dreamy. The seven year old is just beginning to get adult teeth. His or her emotions are easily influenced by impressions from the world, with tears changing to smiles relatively easily.

The twelve year old, on the other hand, has a head that is very awake for thinking and longer limbs which seem heavy, tired, and often awkward to control. There is a rich and sometimes over-powering inner emotional life; the older child brings a great deal more to each experience. Physically, the sexual organs are beginning to mature as the child enters puberty.

The nine-year-old is in the middle between the world of early childhood and the world of adolescence. The physical and emotional changes which you may observe in your nine-year-old child are the outer manifestations of the tremendous change in consciousness which is going on within the child’s expanding inner world. By understanding the nature of these changes, we can better provide support in parenting the nine year old.

Awakening to the world and a new sense of self brings with it a new need: to understand the real world of everyday life, while at the same time long for intimations of something beyond ordinary life. As parents and teachers, our task is to become loving authorities for the growing child, sharing both a true picture of the world and a sense of our own inner striving.