The following is an excerpt from a photography shoot I did in Jeddah, Saudi Arabia for Aramco Magazine in 2006. You can link to the full article below or download it using our download button below.

Saudi Arabia’s food is a reflection of the country’s history and its people’s customs, religion and ways of life. For centuries, Arabs of the Peninsula have traded with—and beyond—India, Africa, Central Asia and the Levant, and that trade has brought Arabia not only wealth but also cultural and especially culinary influences. In urban centers, the simple Bedouin diet of dates and milk yielded to dishes made with a steadily growing repertory of ingredients, including spices, and soon a flavorful and varied Saudi cuisine emerged. 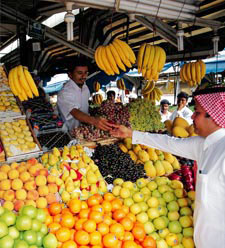 Produce in Saudi Arabia, as in much of the world, is both domestic and imported.
Photograph by Kristie Burns

Perhaps nowhere in the Peninsula is the cuisine more varied, rich and cosmopolitan than in the western province of Hijaz. From the earliest times, caravans laden with frankincense and myrrh, spices and other goods propelled the growth of the region, which lay athwart important trade routes of the ancient world. Makkah, Madinah, Jiddah and Taif became thriving business communities.

The emergence of Islam in the seventh century, however, had a marked effect on the foodways of the region. Not only were some foods and drinks prohibited, but pilgrims flocked to Makkah and Madinah for the Hajj from greater distances and in greater numbers than had attended the annual pagan festival of pre-Islamic times. Every year, some stayed behind and wove themselves into the fabric of Hijazi society. Others came to the holy cities to escape religious persecution elsewhere. All these immigrants were ultimately fully assimilated, but they collectively left a deep impact on the customs and dress of the main population centers of the Hijaz, and their distinct cooking traditions enriched Hijazi cuisine. In modern times, with increasing mobility within Saudi Arabia, the influence of the Hijaz has reached all regions of the kingdom.

Link to the rest of the article HERE

This article appeared on pages 48-57 of the The Kingdom print edition of Aramco World Magazine.

Kristie Karima Burns, a photojournalist, worked in the Middle East from 1986 to 2003. The images available on this site and from her archives represent her travels through remote areas of Egypt, Saudi Arabia, Jordan and Syria. Ms. Burns knowledge of the Arabic language and female gender enabled her to gain access to areas that most photographers are not allowed to visit. You will not find the images on her site anywhere else.

Ms. Burns has published images in many magazines and books around the world including Aramco World Magazine, Terre Lointaines, The New Age (Austraila),Grolier Enclyclopedias, HTF-Tidningen (Sweden), UNICEF Publications,Tempo Magazine (German version of Time Magazine), and more… She also provided the photos for the 1992 & 1996 Egypt editions of the Lonely Planet Guides. One of her photos of The Pyramids was used in the Hollywood movie, Stargate, as a background to the opening scene of the movie. Her exhibit on “Women of Egypt” has been shown in Cairo as well as the United States.