You are here: Home / The Waldorf Year / July / Seasonal Rhythms: The Choleric Summer 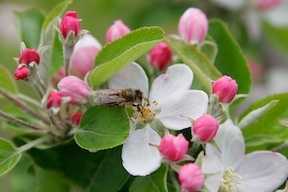 Although I’ve been studying and working with the temperaments for more than 16 years it was not until my lovely choleric daughter, Safia,  was born that I truly was able to understand the fire that burns inside each choleric.  When she writes she does not just put pen to paper, she writes 80-page novels. When she is happy she jumps and screams and when she is sad she wails in agony. She embraces her friends and family with love and hugs, but often does not understand when that same energy is not returned to her.  And as often as those around her feel inspired and energized, they often feel burned-out, as if they have stood too close to the fire within her.

As the summer approaches I reflect on her temperament and prepare myself for the energy summer will bring. For, like the campfires that light the summer nights, the choleric temperament shines the brightest in the summer months.  Safia will be at her most vibrant during the months of June, July and August. However, so will I – and I look forward to connecting with her even more deeply during this time.  Just as the sun rises higher and higher in the sky each day before the solstice, we will see the fires of the choleric temperament rise in all of us until the summer solstice when they start to wane again.  This is a time to embrace the energy, inspiration, and love within all of us and to reflect on what the choleric temperament is and perhaps come to appreciate that which burns in the choleric person all year long – for it is through understanding and appreciation that we can learn to relate to each other with love and respect rather than anger and confusion.

People of the choleric temperament are famous for their strong and assertive egos. Because of this, the choleric is sometimes described as pushy, greedy, loud, talkative, annoying or self-centered. However, once a person understands the true inner motivations of the choleric, these labels fall away and the true choleric is revealed – assertive, without boundaries, self-respecting, clearly intentioned, vibrant, enthusiastic, and determined.  The rhythm of the choleric is one of determination and direction. The choleric person does not march to the steady beat of the melancholic, flow to the steady stream of the phlegmatic or flit with the exciting varied tempo of the sanguine. Rather, the choleric’s rhythm is like the forte notation in music – forceful in all tempos.

Cholerics are comfortable in social situations and often seek them out. Like the sun they have the ability to shine all day without rest – sharing their love and passion with anyone who is in the room with them. In fact, their intense energy may create disharmony for friends and family members who need more personal space or more quiet time. However, despite the discomfort, friends realize that the choleric is the spark that keeps things interesting and alive. Cholerics are full of passion and are rarely satisfied with anything they deem ordinary. Because of this, the creative fires of the choleric are constantly burning in their attempts to keep things exciting.

Like the sun, the choleric may also be inclined to burn those who bask too long in the glow. This harm, however, is always unintentional. The sunny cholerics are free in giving – shining their rays of warmth and energy into every corner and on every person and never fearful they will run out of energy, love or passion.  Since cholerics are free in giving emotions, things and support, they often do not feel they are asking too much of others if they ask for the same in return. Cholerics often do not realize that others, lacking the energy, tolerance, and passion of the choleric, or perhaps fearful they may run out of love or energy, may simply be unable to give the same. Friends and family members can end up feeling “charred” or “inflamed” and cholerics can end up feeling dissatisfied because their own needs are not being met.

So many misunderstandings and so many moments of anger could be prevented if only we could understand each other’s temperaments more deeply. Fortunately there are many opportunities to do this. There are many books, classes and websites that talk about the concept of the temperaments. My new book, The Temperaments and the Adult-Child Relationship, speaks about the sixteen different temperament combinations that happen between adults and children. The temperaments are also used in Chinese, Ayurvedic, Unanii Tibb, Traditional Herbalism, and other healing methods. Temperament evaluations, such as the Myers-Briggs Evaluation are given to people when they apply for jobs.  However, there are also many methods of connecting and understanding the temperaments that we already use in everyday life – celebrations and stories.

It is through studying the temperaments that I have come to realize that the modern celebrations and ancient rituals of the summer solstice were not only tools to help humans balance with the elements of the earth, but also to balance with the elements of each other.  In the ancient Germanic and Celtic tribes of Europe pagans celebrated the Midsummer with bonfires. The nights were filled with love, fire and festivals. These celebrations were intended to boost the sun’s energy so it would remain powerful during the rest of the growing season. In Christian countries, the feast day of St. John the Baptist was set during Midsummer and honored a man who was said to have been “filled with the fire of the Holy Spirit since he was in the womb”. The ancient Essenes even had temples built to highlight the beauty and power of the sun. In the ruins of Qumran there is a room in which the sun shines at an angle of 286 degrees and perfectly illuminated an Eastern wall on the day of their summer solstice celebrations. The Native American Natchez tribe even worshiped the sun and believed that their ruler was a descendant of the sun. Every summer they held a first fruits ceremony and offered the leader fruits. By participating in these rituals people were bonding with nature but they were also celebrating and connecting with the fire of the choleric person that is full of love and the power to inspire and make things grow.

By embracing the intensity of the summer we are embracing the fire of the choleric people and learning to live with and understand them better. We also learn to come to terms with the choleric temperament that lives in all of us – that part of us that we often deny – the passion that must wait because we have housework to get done, the joy or anger that does not get expressed as we stay calm for our children, or the desire to fulfill our senses that often gets denied as we fulfill the desires of others.

Another traditional avenue to understanding and embracing the temperaments is through fairytales. Through listening to tales about the choleric person, cholerics are empowered to embrace who they are and the choleric’s friends and family are led into a greater understanding of how complex, energetic, generous, determined and powerful a choleric person can be. One example of a fairytale that features a choleric is Rumpelstiltskin . When I was a child I saw Rumpelstiltskin as the evil character. However, if one reads the story again it is apparent that he is simply a joyfully and naïve man who generously helped the young girl spin for hours and hours yet was surprised when she was not willing to hand over her first born child.  Just like the choleric person, the man did not understand that the great energy he was able to give was not able to be returned by the girl. And in true choleric spirit, he showed compassion when she cried and gave her numerous chances to guess his name and thus break the promise. When asked for an alternative to give him something else, Rumpelstiltskin replied in true choleric style, “No, something that is living is dearer to me than all the treasures in the world.”

Thumbelina is another traditional Grimm’s tale that features a choleric, Thumbelina , who is so filled with energy and love for her family that she can perform great feats on their behalf. In another Grimm’s tale, The Twelve Dancing Princesses, it seems that the king was blessed with not just one, but twelve choleric daughters, who all desire to dance the night away among friends rather than sleep. Even Aesop’s fables are filled with choleric characters. In the well known story of the Tortoise and the Hare, the choleric hare challenges the tortoise to a race and jumps into the challenge with an overly confident strategy. Goldilocks, in Goldilocks and the Three Bears reveals her choleric tendencies with her determination to get her needs met, even if it means she will meet with danger in doing so. There are many other stories that include unicorns or dragons, many of which are of the choleric temperament.

Along with embracing the choleric one must also consider that the ultimate goal in learning about the temperaments is to balance them. Just as the season of summer is balanced by autumn, winter and spring, the choleric person must also be balanced to help them experience harmony in their health and life. Because cholerics are of a hot and dry temperament any food or activity that is cool or wet is beneficial for them. Activities like yoga, meditation, swimming and walking help the choleric establish a more balanced rhythm in their life. And just as the Native American leader was offered fruits during the summer solstice, fruits are also beneficial to balance the choleric temperament. In fact, many choleric children are intuitively drawn to fruits more than vegetables and may shun vegetables or other food in favor of a bowl of fruit.

Be embracing the power of the choleric, understanding its rhythm and seeking its balance we can relate better to the choleric people in our lives and bring out the passions that lie within us all. Summer, being the time of the choleric, is the perfect time to do this.