A few years ago my friend’s friend who teaches a college level science class told him about how he impressed the students with this simple experiment.

This may already be “been there done that” for everyone but the idea impressed me because someone we know actually used this in their class and I didn’t just hear about it on some Internet chain. I also thought this might be a good experiment to show how healthy Waldorf and Earthschooling are. Why? Because when you focus on more natural and environmentally friendly methods of schooling you brain expands instead of getting “cooked” like the egg. 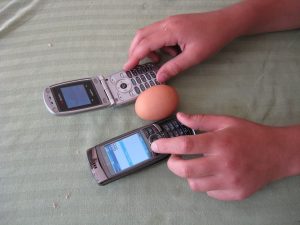 So we tried his experiment. We put a raw egg between two cell phones. We then followed the experiment instructions by connecting the phones by calling each other. We then waited 30 minutes. We checked the egg.

We found out later that it has already been tried by Snopes and was a known hoax.

But was this also an Earthschooling failure?

Absolutely not! It was a great success!

When we found out it didn’t work Sunii then wanted to take the egg out onto the pavement and see if the sun was hot enough to cook it. His friend that was with him told him not to try that because his sister had already tried that last year and it didn’t work. He even explained about why it didn’t work. Of course he had to try it anyway.

So the next step was to see if the magnifying glass he uses to burn leaves with would cook the egg!

It worked a little bit!

So we didn’t learn much about the dangers of cell phones but we did learn a lot about the scientific process! And I was reminded that the value in a lesson is not always in the final result or the “success” but in the process of trying new things, having theories, and discovering things on one’s own. These things are just as valuable as completing a math worksheet and getting all the answers “right”.

Try having a “scientific process” day in your classroom. Start by having everyone in the class pose a scientific question. Then, spend the day finding out the answers to one or more of those questions.