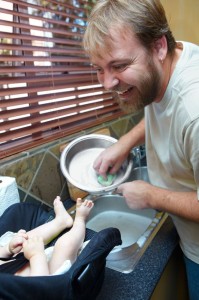 One day during the early years of motherhood I was doing the dishes and realized how, in that moment, I was so happy enjoying the process of creating a beautiful space and feeling so thankful I had a space to call my own and make beautiful. Then I thought…wouldn’t it be great if I could feel like this every day instead of resenting so many of the household tasks I have to do?

And then I went a step further and thought, “wouldn’t it be great if we could teach our children to feel like this too?”

Then it dawned on me – I was already doing this by using the Waldorf inspired Earthschooling curriculum –  but was not applying it to my home. I was using these tools every day by educating my children in the Waldorf method.  But perhaps I could use the Waldorf methods of modeling and process with our household chores and not just our schoolwork or classroom-area chores.

In the Waldorf classroom modeling is important. A young child learns what he sees more readily than what he is formally “taught”. Thus, a teacher or parent wanting a child to learn knitting, cooking, reading, writing, organizing or other tasks must model this behavior themselves. However, modeling it in physical form is not enough. I realized I had been going through the motions of picking up toys, doing dishes, sweeping and scrubbing, but many times I would rush through the task, complain about it or nag the child who was assigned the task and not doing it. I was modeling action but not attitude.

One small example that is easy to share is with my son who would constantly forget to empty the garbage can he was assigned. We would all remind him day after day after day only to have him “forget” right after we reminded him and hardly ever remember on his own. So I changed my approach. If he forgot I would do it with him around. I would say, “let me help you with this” and we would do it together. Then I would smile and comment about how much I loved how clean everything was and how nice it would be to use the garbage can now that it was empty and ready to receive more. I made the experience positive for him.  This resulted in a complete change in the way he did the task himself. He also became more positive and “forgot” far less often!

In Waldorf inspired education we are also taught to help the child focus on the process of their work rather than a set or random outcome. Education in the Waldorf inspired Earthschooling classroom involves a focus on the process of drawing, reading, writing and creating rather than a full-speed-ahead focus on knowing how to read, doing well on an exam or finishing a long essay or picture. The child is allowed to enjoy the learning process instead of becoming anxious that their progress is not quick enough, their test scores not high enough, or their performance is not good enough.

I decided to try this approach with the chores as well. Instead of focusing on what the child did not get done I started focusing on the process and what they did get done. Perhaps the floor was not swept but the things were picked up of the floor and it was ready to be swept. Perhaps the garbage was not empty in the kitchen but the child’s room was clean and perhaps they didn’t load the dishwasher but they did remember to rinse the dishes and get them ready.  I also started making chores a more enjoyable experience. I realized that when we worked together we inspired each other. If I started cleaning and was happy about it then inevitably one of the children would join in or would later do something to add to the completion of the project. It is awfully hard to leave the sink dirty after I just cleaned the bathroom floor and it is awfully hard to look at a dirty floor if I just did the dishes and scrubbed all the counters. Somehow cleaning one part of something becomes contagious. And often, just the enjoyment of having someone to work with was enough motivation.

Your “assignment” this week is to try this method in your own home with one or many chores. Let us know how it goes by posting comments to this BLOG.