Here are some extra Grammar Verses you can use for ages first through sixth grade depending on what you are working on at the time.

A cat has claws at the ends of its paws and a comma is a pause at the end of a clause.

‘Q’ and ‘U’ stick like glue. This rhyme helps you to remember that, after a ‘q’, there is almost always a ‘u’

When two vowels go walking, the first one does the talking.

A is for actions and e for events…

• Accept: To receive or agree (verb) — He accepted their apology.
• Except: Other than (preposition) — Everyone went to the beach except Tyler.
• Affect: To influence (verb) — Will lack of sleep affect your mood?
• Effect: Result (noun) — Will lack of sleep have an effect on your mood?
• Than: Comparison — He is richer than she is.
• Then: Order of events — First we must study, then we can play.

A bossy ‘e’ at the end of a word can tell the vowel to say its own name.

No English words end with the letter V.

rhythm has your two hips moving – it sums up rhythm

“Every name is called a NOUN,
As field and fountain, street and town;
In place of noun the PRONOUN stands,
As he and she can clap their hands;
The ADJECTIVE describes a thing,
As magic wand or bridal ring;
The VERB means action, something done-
To read and write, to jump and run;
How things are done the ADVERBS tell,
As quickly, slowly, badly, well;
The PREPOSITION shows relation,
As in the street or at the station;
CONJUNCTIONS join, in many ways,
Sentences, words, or phrase and phrase;
The INTERJECTION cries out, ‘Hark! I need an exclamation mark!’

Copyrighted Verses Only for Earthschooling…

When I was young, I could not speak,
I cried for everything I needed –
Then I named the things around,
I learned the nouns; I learned the NOUNS!

Small nouns first like DOG and CAT,
The harder ones like NOMENCLATURE.
The world is full of things with names,
Perhaps I’ll never learn them all.

The next words I learned were…
Those which describe –
They’re side-by-side,
ADJECTIVE and noun,
RED dog or a FUNNY clown.

Red dog SITS said I, and added on the VERB –
It’s also called the ‘doing’ word.

Every single thing on earth can do its thing,
But HOW it’s done requires another kind of word –
The ADVERB which adds to the verb.
Red dog sits DOWN – there, the adverb ‘down’
Is added to the verb ‘sits’.
There are many more you’ll find,
Like running FAST and falls BEHIND.

The ARTICLE ‘the’ helps make it complete,
The sentence is neat –
The red dog sits down.
AN eagle – A crown.

IN, OUT, UNDER, OVER, TO and FROM,
The PREPOSITION’S there where it belongs.

I use PRONOUNS all the time
Like HE and IT, THERIS, YOURS and MINE,
The pronouns stand in place of nouns –
They’re so much shorter too I’ve found.

There are some words with join together
Different thoughts in any sentence,
These are called CONJUNCTION words
Like AND connecting ‘bees and birds’.

What would I call words like OH, OW, and HARK?
I’m left in the dark…?
Ah, the INTERJECTION!
And now there are none.

Hey – grammar can be fun!

Don’t say you have not heard of me,
A most important chap.
I’m found in front of all the rest,
In HEADING, TITLES, dates I’m best,
My name is Captain Cap. 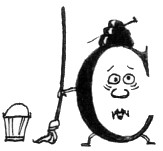 I’m always somewhere close behind,
I never win the race.
The hardest worker of them all,
I bear the load and never fall –
I’m Lois Lower Case.

CHORUS
When thinking’s clear and hearts are good
Our wills we bring to bear,
Our written work is understood
When punctuation’s there

Ho, ho, hooray! For me make way!
I won’t stand at the rear!
I show the things that are absurd!
And I can Shout!!! With a word!
The Exclamation’s here!

I have not been invited in,
(But I came just the same)
I butt in there – I butt in here,
(I only wish to make things clear)
Jack Bracket is my name.

A very busy boy am I,
Two jobs they’ve given me,
Possessive Case, Like Charley’s aunt,
Contracted words like won’t and can’t –
D’Floss Apostrophe. 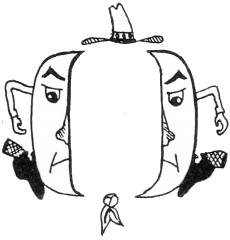 “What’s this I hear with my 4 ears?
Did someone speak? Oh dear.
I must be there to hear it all,
I quote things short, I quote things tall,
Inverted Comm’s here.”

A dot, dot, dot then turn the page…
…another dot, dot, dot.
They show the way for more to come,
They also show that some…’s gone,
My children mark the spot…

A simple dot is all I am,
The sentence traffic cop.
When I say ‘stop!’ they cannot go.
I never start – I end the show.
I’m Officer Full Stop 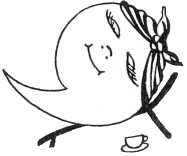 A tiny rest is all I am,
Come pause awhile with me,
I mark off words of every kind,
I follow link words too you’ll find,
Momma Comma, busy bee,

I introduce a series well:
Col Colon is my name:
The Semi Colon keeps in touch;
He marks the series off; we’re much
A like; but not the same: 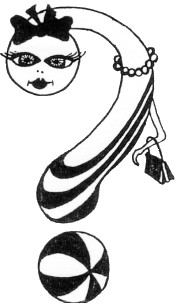 Where am I used? What is my name?
Why keep me in the dark?
Why am I always curious?
Why do you get so furious?
Am I the Question Mark?